Of all the beasties I have had to deal with, Bed Bugs have got to be the most disgusting. I hate the little blighters! There are several species of Bed Bug but this article will deal with the Common Bed Bug (Cimex lectularius), as it’s the most widespread, being found in most temperate climates around the world and is responsible for most Bed Bug bites.

The Common Bed Bug feeds off human blood and doesn’t discriminate between blood groups. The adult has a flat reddish-brown oval body and measures approximately 4-5mm in length. When the Bed Bug bites and starts feeding, their abdomen fills up with blood and expands leaving the bug resembling an apple seed with legs.

Bed Bugs are far less common than they used to be but have been making a bit of a comeback in recent years. An epidemic exploded a few years ago in New York City and many urban centers in North America and Europe are reporting a significant increase in reported infestations. Some high profile buildings were reported to have previously fallen victim to the bugs, including Nike’s flagship store in Manhatten and the BBC studio in the United Nations building.

Whilst large infestations do occur, it is more common to deal with infestations of small numbers of bugs. Bed Bugs can enter the home via second-hand beds, sofas and curtains and may even be transferred in luggage after visiting hotels, guesthouses, etc. They can even remain dormant for several months in empty buildings, only becoming active once again when the building is re-occupied. Something to keep in mind if purchasing a home that has been vacant for some time!

How to kill Bed Bugs yourself

Bed Bugs are nocturnal, so the first sign that you have a problem, unfortunately, is when you are bitten. Telltale Bed Bug bites are a series of bites close together and blood spots on the bed sheet. A Bed Bug bite isn’t a true bite, as they don’t posses biting mouthparts, rather they use 2 hollow tubes and injects their victims with an anaesthetic and an anticoagulant. This means that the victim is unaware of the bite until sometime later with the onset of severe itchiness.
Bed Bug bites often occur in a small row. Reaction to the bite will vary from person to person. Some will suffer a hard welt, white in colour with a reddish swelling and secondary infection is always a risk with people scratching the itch. Telltale signs of Bed Bug activity are small spots of blood on your sheets. You may also detect an almond-like odour in the room, although this is more likely to occur in heavy infestations rather than rooms with a few bugs.

Eradicating Bed Bugs is quite difficult for the untrained amateur, so we’ll first look at prevention. Contrary to popular misconception, the cleanliness of your home has no bearing on whether you are at risk from a Bed Bug infestation. Should Bed Bugs find their way into your home, they will look for shelter typically in the stitching of mattresses, sofas and curtains. Gaps behind wallpaper and skirting boards may also harbour bugs. Regular vacuuming of these locations can remove the little suckers. A cheap anti-bug barrier can be built by wrapping double-sided sticky tape around each leg of the bed. This would need replacing regularly as settling dust will reduce the adhesiveness over time, so a better solution is to place each leg of the bed into a small pot, cup or similar container of mineral oil to create a moat-effect. This should prevent the bugs from crawling onto the bed from the floor but will not deter them from dropping down onto the bed from a higher shelf or from the wall, for example. Make sure the bed is not pushed up against a wall and that none of the bed linen reaches the floor.

Bugs can enter a home on clothing or luggage after you have visited an infested hotel or hostel. Shaking your clothes out, upon return will NOT be sufficient to remove any bugs. If you have a large freezer, dump the whole suitcase with clothes still in it, into the freezer and leave it there for a few hours until your sure everything is frozen. Be sure to open the zipper a little to let the cold air inside. If the freezer option is not available to you, launder your clothing immediately on a hot wash and leave the luggage outside until you can inspect it closely. Vaccuum any seams and pleats to ensure no bugs are loitering. 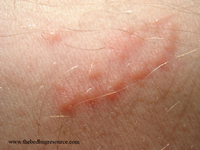 If you are positive that you do have an infestation, then vacuuming alone is unlikely to eradicate the problem. Remove all bedding and sanitize it by washing on a hot wash (50 Centigrade or 120 Fahrenheit).

You can treat the mattress with a portable steam cleaner that are available from many retailers. Pay particular attention to any seams and around the spring buttons and thoroughly vacuum the mattress after letting it air for a few hours. If you have a divan bed, be sure to go over the base thoroughly with the steamer. A stiff brush is useful for dislodging any eggs and shed skins from seams. If you can dismantle your bed frame, do so, as this will show up any hiding bugs. After de-bugging your bed and sanitizing your bedding, the last thing you want is for stray bugs re-infesting from that gap behind your wardrobe. So use this as an excuse to carry out a severe spring-cleaning of your room. Trust me, the thought of these little sweetcorn from hell crawling under the covers to suck your blood in the dead of night should be motivation enough to grab a duster and apply some elbow grease! Remove drawers from any cupboards and dressers and give them a thorough cleaning. Seal any cracks and holes in the fabric of the room with a suitable sealant – a caulking gun and silicon gel is ideal for this purpose.

Diatomaceous Earth (DE) is formed from the fossilized shells of tiny marine animals (Diatoms). It is commercially available as Food Grade and Pool Grade. Only use Food Grade Diatomaceous Earth in the home. Pool Grade DE (used in swimming pool filtration systems) has chemicals added to it which are harmful to humans and animals.

There is some mixed information about the effectiveness of Diatomaceous Earth at killing or curing a Bed Bug infestation. I suspect that part of the problem is that Diatomaceous Earth is not usually a treatment provided by professional exterminators, therefore, there is probably a large variance in the thoroughness of treatment applied by homeowners. Some people will have researched the substance and applied it correctly and thoroughly and reported their success, whilst others will have done a half-hearted treatment and reported their failures as a fault of the substance. The thing to understand is that Diatomaceous Earth will kill Bed Bugs but that the treatment needs to be applied thoroughly and takes time, typically 2 weeks, to do it’s stuff. DE kills insects through abrasion. Under the microscope, the Diatom shells appear as razor sharp scales. These work their way into the joints of insects that come into contact with it. Through motion, the DE scrapes away at the insect’s exoskeleton (outer shell), eventually creating tears and allowing air to the insect’s internal organs. Eventually, the insect dehydrates and dies.

Use this easy to follow inspection regime to periodically check your rooms for signs of Bed Bugs.

A video about Home Remedies for Bed Bugs

Bring In The Pro’s?

So what about the professionals – should you just take the easy route and pay for them to solve your problem? Well if you do, they will come along and tell you to strip the bed so that they can apply a residual insecticide to the mattress and bed frame/divan base. If they are thorough and know their business, they should also look for potential harbourage throughout the room and treat these areas too. You are still going to have to deal with sanitizing your bedding, so you need to weigh up whether you want to pay for the spray or the cost of a steam cleaner. As bed bugs infestations are not as common as other pests, many professional operatives lack the experience to deal with them, even within some of the larger nationwide companies. So if you are going to seek professional help, do some research and choose a company that details how they treat the problem.

Check your bed linen immediately if you ever suspect you’re a victim of Bed Bug bites. The key is to spot Bed Bug activity as early as possible. If done so, you are probably dealing with an infestation of small numbers. I would recommend following the guidance here to try and eradicate this problem yourself. If you haven’t been able to solve the problem, then by all means seek professional help.